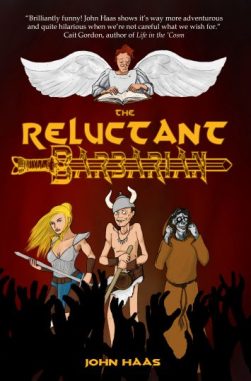 So, full disclosure: I received an e-ARC of this book from my publisher, in hopes I might give words of praise for it.

Even before I met John Haas, and The Reluctant Barbarian had only been pitched to Renaissance at CanCon 2016, this book had me at the title. That would have been enough to intrigue me to read it.

Then I discovered the premise: A backlogged angel who grants wishes arrives at Arthur Jenkins accounting firm, ready to grant Arthur’s wish (that he made as a young boy) to go on adventures with his best friend, Mike. As kids, Arthur and Mike had just seen Conan the Barbarian and Arthur desperately wanted to be a barbarian. At nine. Because he was nine. Nine-years-old at the time. Now he’s middle-aged. And, um, oh yeah, and Mike is now dead.

This doesn’t impede the angel, who insists Arthur will get his wish whether the process analyst wants it or not. Oh dear.

Next thing we know, time and space morph, and there’s Arthur, in a loincloth, missing Arnold’s muscle mass, and Mike, right beside him. Mike is alive, sort of. His spirit is, anyway. His body, not so much. Poor Mike resembles an extra in The Walking Dead. Guess the angels didn’t feel it was necessary to regenerate his body back to not-looking-like-a-decaying-corpse form.

But when Arthur and Mike encounter a strong and beautiful paladin, Arthur goes gooey, and Mike rolls his lidless eyes. Everything after that is pretty much hysterical.

So, I don’t give words of praise unless they are heartfelt. And I really enjoyed this book. One scene in particular had me laughing even days after I read it. (Arthur and his horse have a love-hate-mostly-hate relationship.)

If you’re looking for a light and witty read, lie back with this book and be prepared to snicker through your nose a lot. It’s great fun!

Cait Gordon is the author of Life in the ’Cosm, a comedic space opera where boy meets girl, but girl doesn’t notice boy because she’s sharing a body with another boy. She is also the creator and editor of the Spoonie Authors Network. You can follow Cait on Facebook  and Twitter.

Important! Websites that list any non-book products (like T-shirts and other merch) associated with my name might not have had my approval for their posting. Shop with care, folks!

In other news, I’m on Mastodon now! Please be patient with me as I try to navigate this new thing!