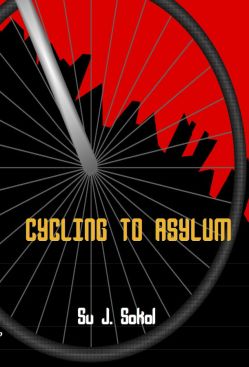 When a story stays in my head days after I’ve read it or has a major impact on me, it goes on my reviews list. Su Sokol‘s Cycling to Asylum is one of those books that will remain with me a good while.

In Asylum we meet Laek, a married school teacher and father of two with a genuinely beaming smile that could bring you to your knees. A man of integrity who stands up for social justice, Laek, with his lawyer wife Janie, are no strangers to doing the right thing, even when it means pushing boundaries. This can be challenging in a United States of the not-so-distant future, where screens, wrist bands, and a violent police force monitor one’s activities constantly. There’s also something else about Laek—he disassociates from the moment far too often, and has a nebulous past where he managed to live most of his youth “off the grid,” away from policing eyes. When a figure from that past turns up one night, Laek is jolted with the realisation that he and his family are no longer safe in their home of Brooklyn, New York.

This book is like four stories in one, as we read the perspectives from Laek, Janie, Siri (their daughter), and Simon. The author does an excellent job in bringing us into the four different head spaces. What struck me the most about this novel was how the overly-monitoring, paranoid policing culture of the US could become a reality in any country, if we become too complacent about human dignity. I dare to say that it’s almost a prophetic warning to stay sharp and speak out against hate speech, and to vote, vote, vote for leaders who work to protect the rights of our fellow citizens.

I had the same feeling reading Cycling to Asylum as I did watching the prequel scenes of the new Handmaid’s Tale series. I could see how we could easily go from where we are now to a dystopian and oppressive reality.

Cycling to Asylum was long-listed for a Sunburst award, and I could see why. In fact, in my humble opinion it should have been short-listed, at the very least. The characters’ perspectives equally kept my interest, meaning, I didn’t want to skip over any one of their chapters. The political insights were also frighteningly plausible. Finally, being an ex-Montrealer, I found the nuances of that city so perfectly captured, I felt homesick.

I highly recommend this for your next read. Just. Wow.

Cait Gordon is the author of Life in the ’Cosm, a comedic space opera where boy meets girl, but girl doesn’t notice boy because she’s sharing a body with another boy. She is also the creator and editor of the Spoonie Authors Network. You can follow Cait on Facebook  and Twitter.