From time to time I’m faced with feedback about the main character in Life in the ’Cosm, who is Virj Ofreesin (pronounced verge of reason). I hear everything from him being an unreliable narrator, to annoying and frustrating, and to having his head way too far up his backside.

And you know what? It’s all true. My readers are smart cookies. Insightful lot!

There’s also been some opinion about why every so often I broke the fourth wall in the story. A simple explanation AND SPOILERY is this: Life in the Microcosm is not written by me, but by Virj himself. I only wrote the last chapter. So, blame Virj. 😉 I mean, we know by the story that his writing skills need work, so even in his nonfiction, he forgets not to speak to the reader at times.

When I set out to put this story together, I was rebelling against the notion of the god-like science fiction hero— glorious in his form, skilled beyond reason, and possessing a golden touch for success. Nope. I figured if life existed on other planets, there’s got to be some poor soul who hates his mundane job, has a rotund figure because of his love for cake, and can’t even operate hands-free computer goggles. Virj is my everyman. He’s spent his life so shy and under-confident, the only woman he pines for is completely unattainable. (I mean, really…she shares a body with her mate.) Most of who Frayda is comes from Virj’s own imagination. He’s so wrapped up in a fantasy that he’s oblivious to reality.

Xax warns Virj that if Virj tries for someone else’s partner, he might miss finding his own person. And the little green guy’s tenacity with holding onto a dream instead of seeing who’s right in front of him eventually smacks him hard in the snout.

Even though he’s completely made up, I have known people in real life who cling onto what or whom they think they need while missing the true joys already in their lives. And like my readers with Virj, I want to smack these folks into the middle of next week. (I must say I’m extremely proud of my self-control in this area.)

But yeah, even my mother said she wanted to punch him. Heck, so did I! But that’s the problem with someone living too much inside a bubble, a microcosm. Like Noola says, we need to get out and look around a bit. Because life is more awesome that we realize.

It’s perfectly okay to not like Virj. Everyone’s entitled to their opinion. I have a soft spot for the little guy myself, and in the end, he finally gets the net.

Plus, I can’t really be angry at him anymore. After all, he’s the one who’s putting a collection of stories together about his warrior dads, Xax and Viv, called The Stealth Lovers. (Yup, I first mentioned this in my WIP of Life in another ’Cosm: Jinny from the Blog.)

Virj’s writing has much improved since he penned Life in the Microcosm, by the way. I reckon it’s probably because Noola is his full-time editor now. 😀

I can’t wait for you to read The Stealth Lovers. And when it comes out, I bet you’ll want to re-read Life in the ’Cosm again! (I defy you to resist!) 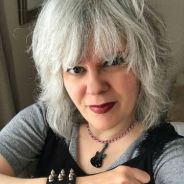 Cait (pronounced like “cat”) Gordon is originally from Verdun, Québec, and has been living in the suburbs of Ottawa since 1998. Her first novel, Life in the ’Cosm (Renaissance) was published in 2016. Her short story, A Night at the Rabbit Hole, appears in the Alice Unbound: Beyond Wonderland anthology (Exile Editions). She’s currently working on The Stealth Lovers, a prequel to the ’Cosm series. For her day job, Cait is a freelance editor. Some of the titles she’s edited include Confessions of a Mad Mooer: Postnatal Depression Sucks (Robin Elizabeth), Camp Follower: One Army Brat’s Story (Michele Sabad), Skylark (S.M. Carrière), Little Yellow Magnet (Jamieson Wolf), A Desert Song (Amy M. Young), and Moonshadow’s Guardian (Dianna Gunn). Cait is also the founder and editor of the Spoonie Authors Network, whose contributors manage chronic conditions and/or disabilities.