August and flash fiction #8 is here! Whew! Yup, I’m still on board for ‘Nathan Burgoine’s 2018 Flash Fiction Challenge. This month we had to write a ghost story that takes place in a tobacco shop that featured an earring as our object.

Now, I don’t write paranormal. So, I imagined ghosts in my own way. Here’s what came out!

“Doesn’t it rub you wrong when the locals call it Sam Hane?”

Eileen smirked. “Sounds like the fella who played with my top half, back in the day.”

Cat laughed hauntingly. A dog barked. “Ah, Sammy Hamish from Scotland. Oh, was he a dish! My top half envies yours just thinking about him.”

“I miss Ireland. Serves us right for following the cailín who seanced us onto that ship.”

“Yeah, I didn’t realize we’d be stuck and eventually make port in Canada. The Easterners were nice enough, though.”

“How did we end up in Ottawa?”

“Come on, Eileen. You remember full well you loved tormenting that Tory politician on the train from Halifax.”

“Making that tosser shit his bunk was the most fun I’d had in decades.”

Cat sighed. “Well, this place isn’t so bad. Especially today, when we can truly experience things.”

Two cigars levitated from the wooden case, stopping in mid air. A long match struck the mahogany counter and lit up, then floated to the tips of each stogie. A few seconds later, wispy smoke rings danced about before fading into nothing. After a few more puffs, two figures materialized, dressed in flowing nightgowns with ruffled sleeves. Eileen wore periwinkle blue and Cat a powder pink. Both women looked to be early 20s at most. Of course, they were almost a hundred years older than that. Still, they liked to keep current. It made them feel young.

“Now, Cat, I’m not worrying about being ‘on fleek.’ You promised me we’d be all about the indulging in what’s bad for us.”

“Fine, but next samhain—”

The shop door opened. In walked a woman in her late teens, followed by a man not much older. Instead of looking about the displays of I Like Big Butts’ finest wares, the couple bent down to examine the nooks and crannies along the floor.

Cat and Eileen put out the cigars in a glass dish, then disappeared.

Fred Tierney, a public-service retiree who owned the place, darted into the main shop from his residence, slightly out of breath. His dog Marty stared into nothingness, barking like mad.

The couple nearly jumped out of their skin at the sound of the golden retriever.

The dog sat quietly but shot a dirty look at the objects who had intruded his human’s space.

Fred stepped around the counter to aid his customers. “May I help you?”

The woman stood up after scrutinizing a floorboard. “Uh, hi. We were in last week to buy a pipe for my father?”

“Ah, yes,” said Fred, adjusting his glasses. The lines around his eyes deepened when he smiled. “Very fine craftsmanship.”

“Yeah, well, the morning I bought it, I’d sort of borrowed my grandmother’s earrings. Maybe without asking.”

“And lost one. I was stupid to have worn them in the first place. Granny always said the clasps were wonky. I thought I was being careful by regularly checking my ears.”

“Well, now, I’m sure your grandmother will understand.”

The woman sighed. Her boyfriend put his arm around her.

“What?!” whispered Eileen. “How do you know this?”

“It’ll go perfectly with the shoes I get next year. Maybe if we follow her home, I can grab the other one for a set!”

“Hey, she took it without asking. Serves her right for losing it in the first place!”

“Ah, fine.” She huffed while drifting towards the cigarette wrappers. Behind a carton lay her treasure. Cat held up the glimmering piece.

On the shop floor, the boyfriend blinked twice. “Um, Cherie, I don’t do drugs.”

His girlfriend turned to him. “What?”

“I don’t do drugs so I can’t be hallucinating, right?”

He pointed to the hovering earring. Cherie gasped, but before she could say anything, the earring jerked to the left. Then to the right. And to the left again.

Marty barked his furry head off.

Fred took off his glasses, then wiped them on his shirttail.

The earring continued to dart back and forth.

“She won’t appreciate it like I will. I’ll treasure it for an eternity!”

“You’ll only be able to wear it once a year!”

“So, once a year for an eternity!”

“Cat!” Eileen lunged, grabbing an arm. Cat howled like a banshee, the noise traversing the spirit realm into that of the living.

The earring flew onto the floor, landing at Cherie’s feet. Trembling, she crouched to pick it up. Then grabbed Tommy and fled.

Marty snorted smugly, wagging his fluffy tail while trotting into the den.

The shopkeep searched for hanging wire and hooks, but found none. Pranksters? He scratched his beard and decided he’d be closed for Halloween. One trick was enough. He’d settle for some treats while he relaxed with Marty by the fire.

When the store was empty, the ghosts materialized.

“It was the right thing to do,” said Eileen.

A growl resonated from Cat’s throat. Another woof followed.

Eileen shrugged her shoulders and put a hand on her friend’s arm.

They exited through the locked door, then drifted towards the Rideau Mall.

When There’s a Ghost of a Chance © 2018 Cait Gordon. All rights reserved. No part of this work may be used or reproduced in any manner whatsoever without permission except in the case of brief quotations in critical articles and reviews. For more information, contact Cait Gordon. 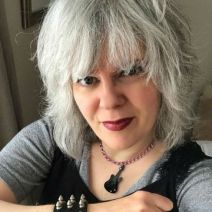 Cait Gordon is the author of Life in the ’Cosm, a story about a little green guy who’s on a quest to save half the person he loves. Cait has recently submitted the prequel to ’Cosm called The Stealth Lovers, a military space opera about legendary warriors Xaxall Knightly and Vivoxx Tirowen. When she’s not writing, she’s editing manuscripts for indie authors and running The Spoonie Authors Network, a blog whose contributors manage disabilities and/or chronic conditions. She also really likes cake.

5 thoughts on “When There’s a Ghost of a Chance”

Important! Websites that list any non-book products (like T-shirts and other merch) associated with my name might not have had my approval for their posting. Shop with care, folks!